The Krishnamurti Archives is the repository of original material pertaining to the teachings of J. Krishnamurti. This includes handwritten manuscripts, letters, photographs, original audio and video recordings and related materials.

The KFA is working collaboratively with the Krishnamurti foundations in the U.K. and India to establish a digital archive of all of Krishnamurti’s talks, which are transcribed for a text record, and also preserved in their original form. Currently, many original materials from the early years are quickly deteriorating, and the K Foundations are rushing to digitize their archival holdings in order to preserve them in a usable form. 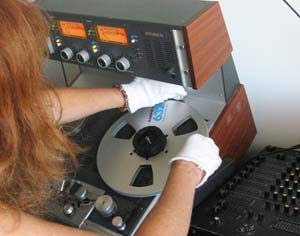 The digitization project is enormous in scope, comprising text, audio, video, and photos. The videos are digitized and stored in high-quality, uncompressed format. From there, selected viedo and audio are published as DVDs, CDs, and on the web. Eventually, all of Krishnamurti’s public talks will be made available online at jkrishnamurti.org. This website, a joint project of the Krishnamurti foundations around the world, is devoted to making Krishnamurti’s work available for free. Audio and video are prepared for online streaming as downloadable mp3s or QuickTime video. Text is downloadable, and the entire library is searchable by key word, topic or chronology.

The importance of the Krishnamurti Archives cannot be overestimated. Not only does it preserve all original materials in a climate controlled vault, but it houses the digital archive for all four of the Krishnamurti foundations (U.S.A., U.K., India, and Spain). Once digitization of all known materials is complete, the digital archive will be duplicated for safety, and housed in the U.S., the U.K., and India. But for the time being, the key location for the digitization project remains Ojai, California.

The KFA has been the fortunate beneficiary of an enormously generous gift by Grace Foundation. They are providing all the equipment needed for such a huge project. Storage is estimated at 100 terabytes. Grace provides servers, computers, storage hard drives, and other infrastructure, and has made a commitment to keeping the digital archive state-of-the-art as technology advances and improved equipment becomes available.

Funds are needed for all aspects of preservation. For example, because most of the KFA’s funds are directed towards making Krishnamurti’s work available to others, facilities and staffing operate on a shoe-string budget. Currently the Krishnamurti Archives is in need of funds for a new compressor for the main vault, replacing the current one which has been in place since 1995 and is now at the end of its useful life span. Above all, funds are needed to increase archive personnel so the task of digitizing the vast amount of material can proceed at a rapid pace.

It has been more than 30 years since Krishnamurti’s death, and the internet has opened up a whole new vista for dissemination. Therefore, the KFA operates at a predicted deficit each year in order to keep as much momentum as it can for dissemination. Donations will restore balance to the KFA’s fiscal status, while increasing the speed at which Krishnamurti’s work can be made available to other. Click here to contribute to the Archives’ projects.